From the imagined to the tangible, Benetti presents an inimitable reverie that has been able to charm the celebrity elite worldwide. The portrait of Prince Rainier III with Grace Kelly on the Benetti Gabbiano in the bay of Monte Carlo remains iconic. Not forgetting the notes of Queen’s song titled Khashoggi ’s Ship, voicing Freddy Mercury’s experience on board M/Y Nabila, the most famous yacht of her time.

SAILING BACK TO THE ROOTS OF ITALIAN EXCELLENCE
The origin of the Benetti shipyard dates back to the foundation of two of the most ancient Italian shipyards: the one of Fratelli Benetti founded in Viareggio in 1873 and the Fratelli Orlando shipyard founded in Livorno in 1866. 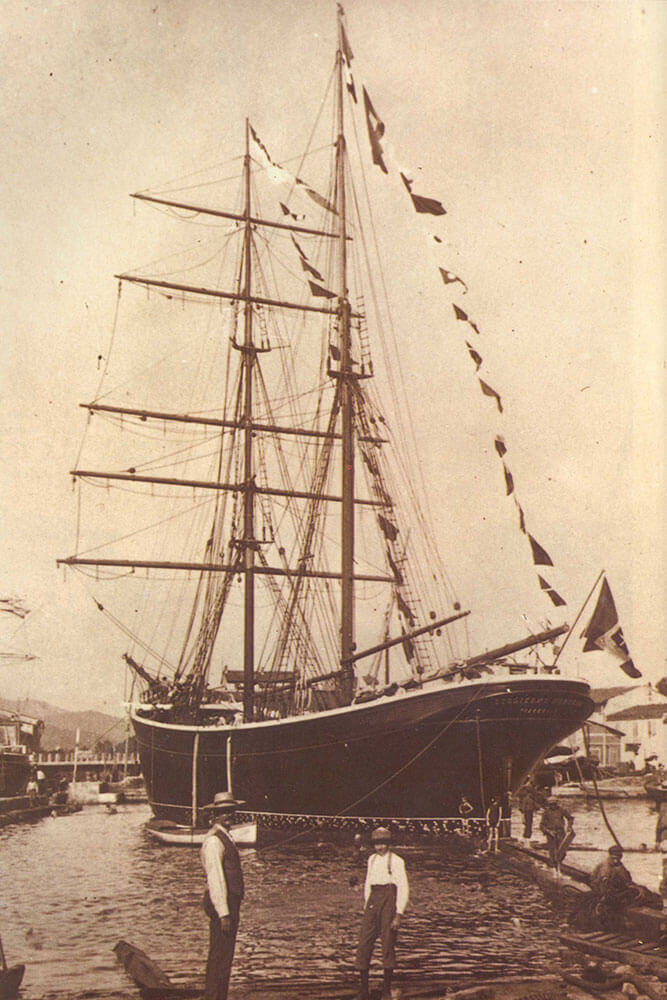 1873 - Foundation of the Benetti shipyard in Viareggio. Since then, the shipyard has launched over 100 sailing vessels. 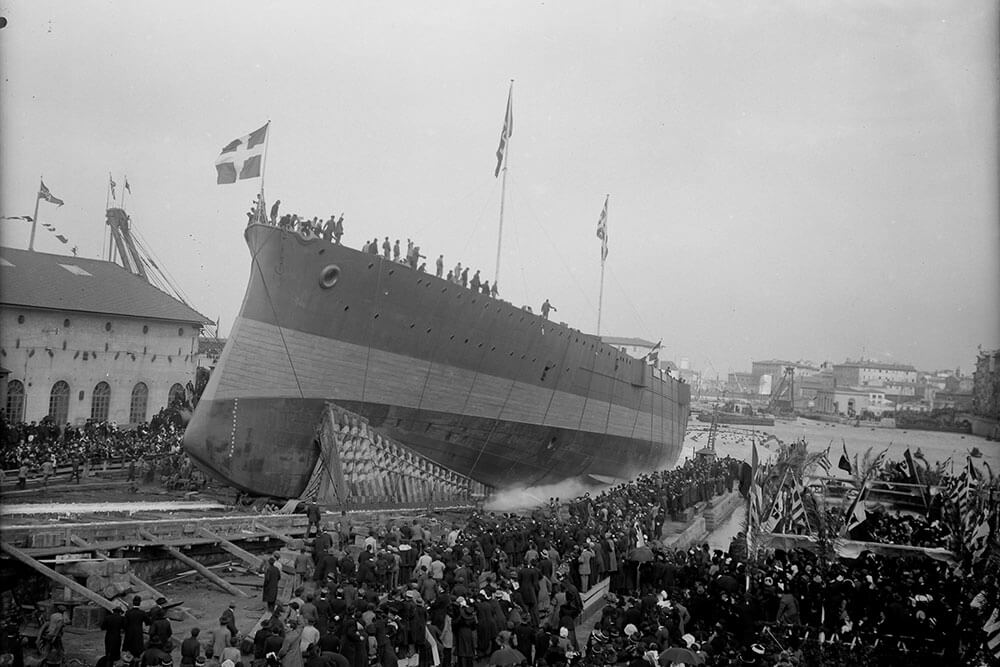 Founded in 1866, the Fratelli Orlando shipyard in Livorno is one of the oldest in Italy. The Morosini Slipway saw the launch of the huge battleships that made the Italian Royal Marines great at the end of the 19th century.
Inside the Livorno Shipyard where in 1896, the Lumiere brothers filmed for one of the first times in the history of Cinema: the launch of the “Varese” battleship.
BENETTI CHARMES THE CELEBRITIES’ ÉLITE
The fame of Benetti as a boutique shipyard for global élites. 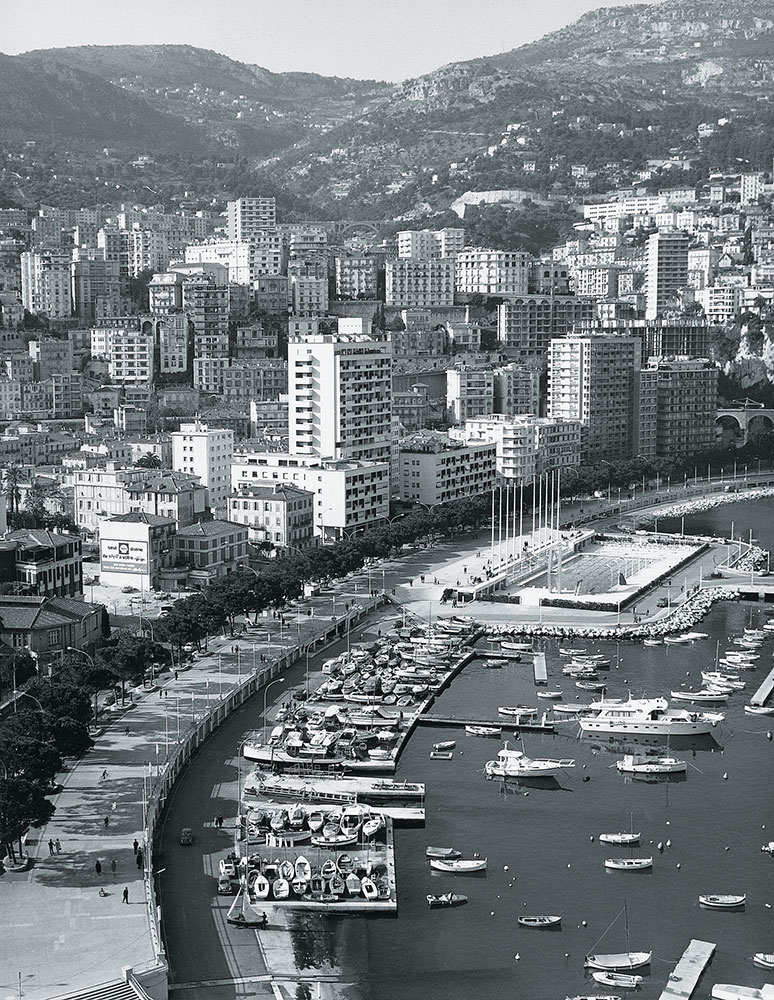 Benetti Gabbiano stands out in the bay of Monte Carlo: the elegance of the Italian shipyard seduces the whole world. 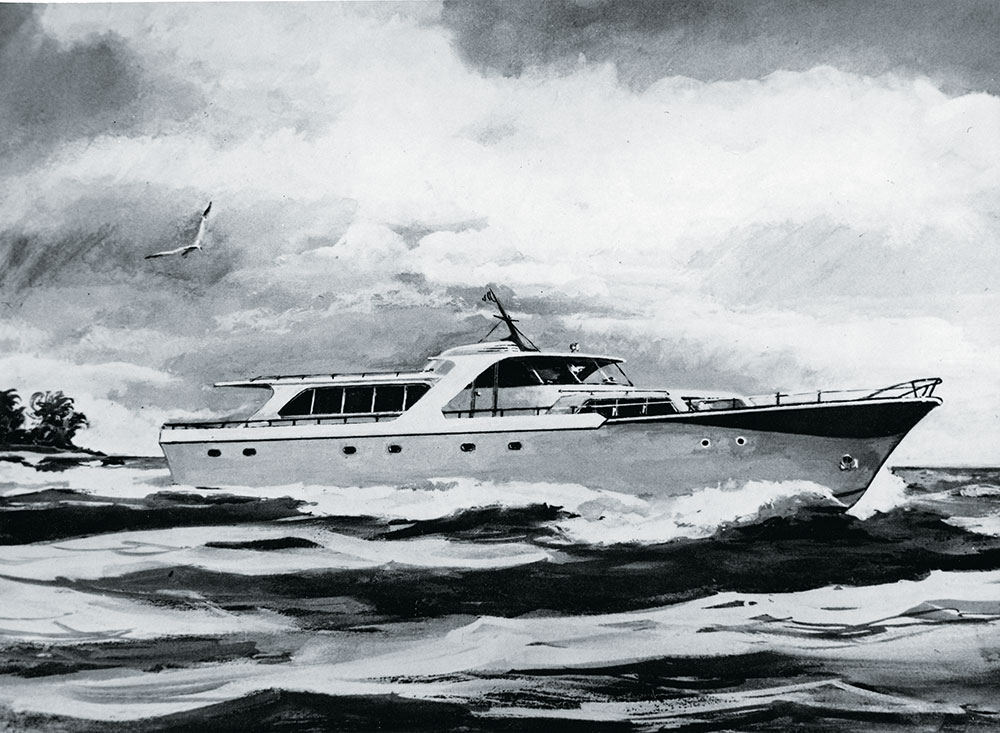 In 1961 Benetti switches from wood to steel and invents the Luxury Motor Yacht: the success goes beyond the wildest imagination of its founders. 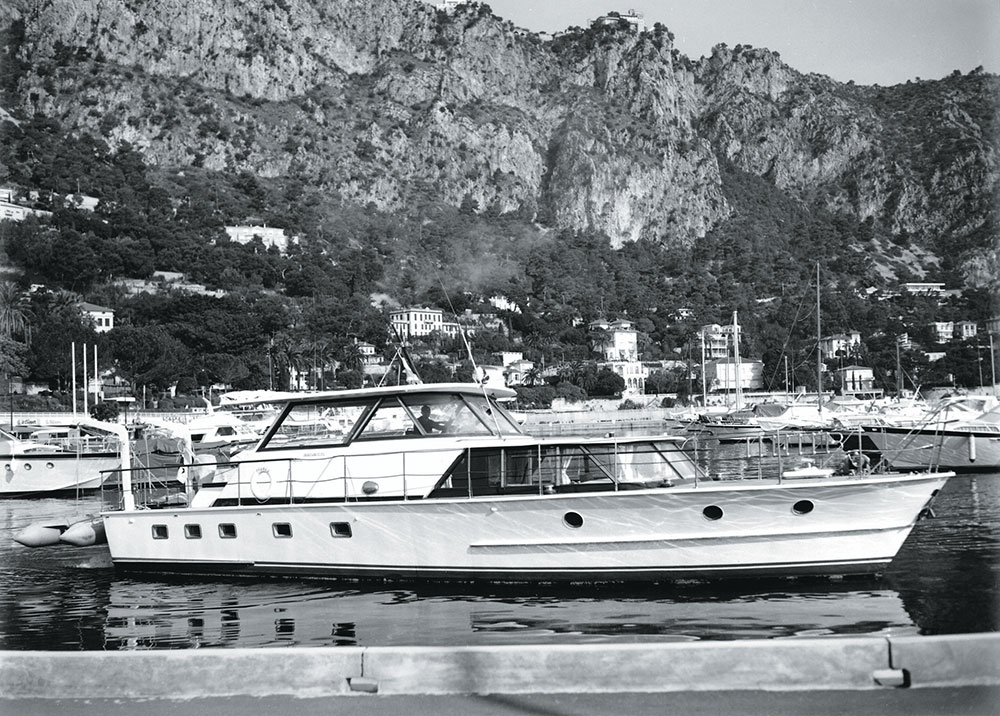 The Luxury Motor Yacht as an emblem of comfort, technology and top quality – it is another great victory for the Italian shipyard.
M/Y NABILA, THE MOST FAMOUS YACHT OF HER TIME
A legend, its character is a genuine eye-catcher for outstanding personalities, cinema and arts. 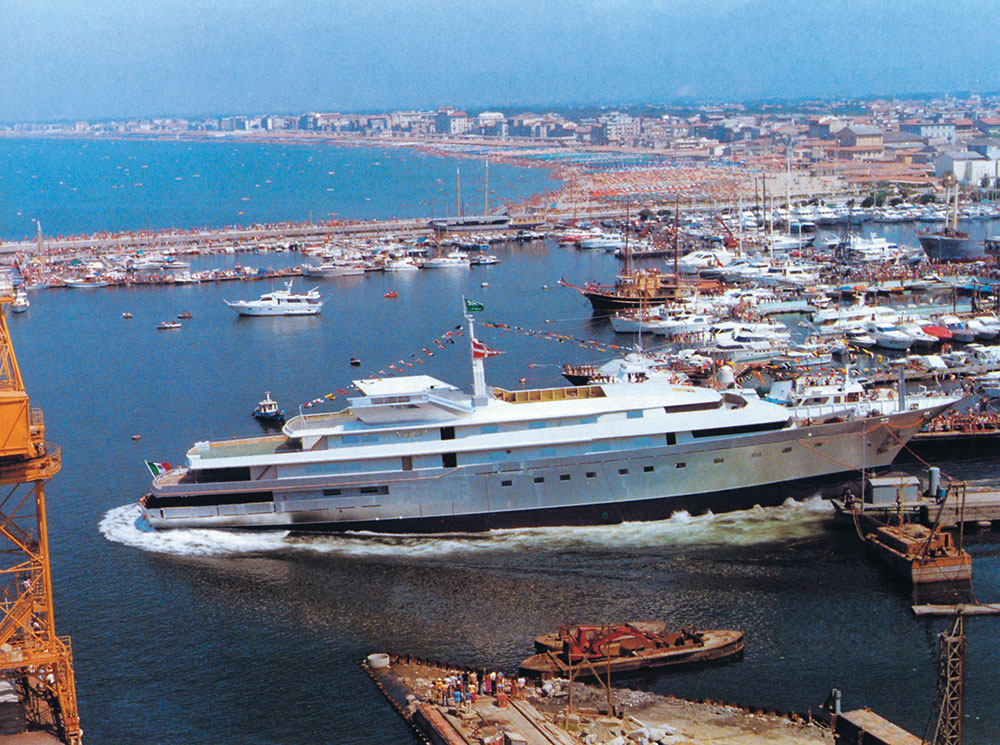 In 1979, Benetti launches the 86 meters M/Y “Nabila", built on commission by the Saudi businessman Adnan Khashoggi, who wanted to build the world’s most luxurious and modern motor yacht. 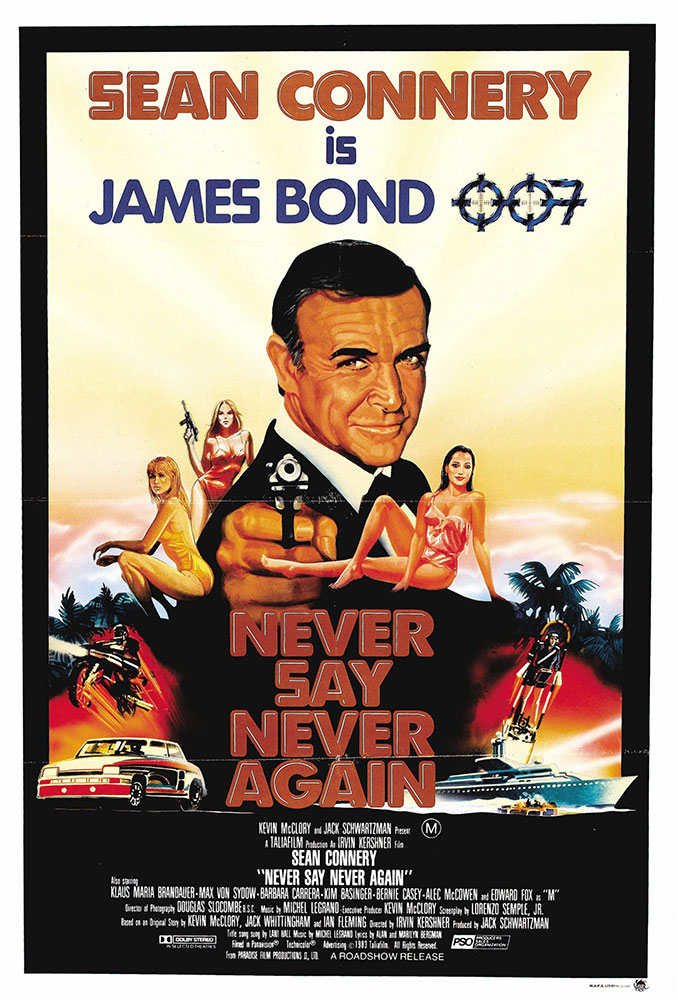 In the early 1980s Sean Connery as James Bond triumphs in “Never Say Never Again”: some scenes from the movie are filmed right on board the “Nabila”. 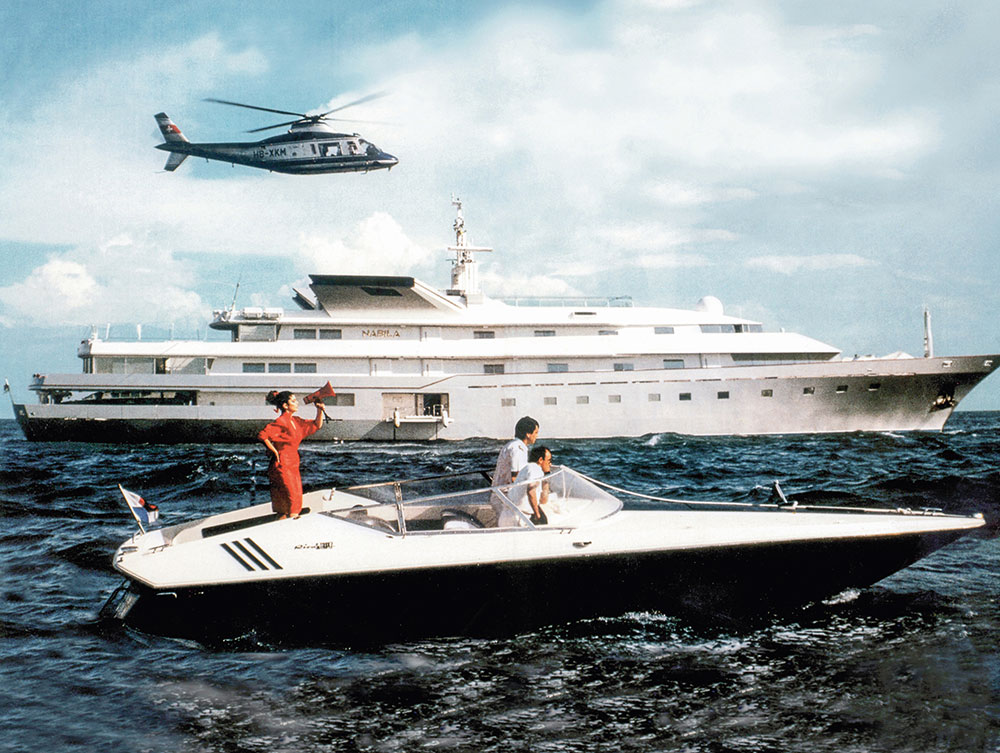 Even Freddy Mercury contributes to make the “Nabila” famous worldwide. The song “Khashoggi’s Ship”, included in Queen’s “The Miracle” album, tells of the legendary parties on board.
CHANGE FOR GROWTH: THE MODERN IMPULSE OF PAOLO VITELLI
A new dynasty takes over the company. 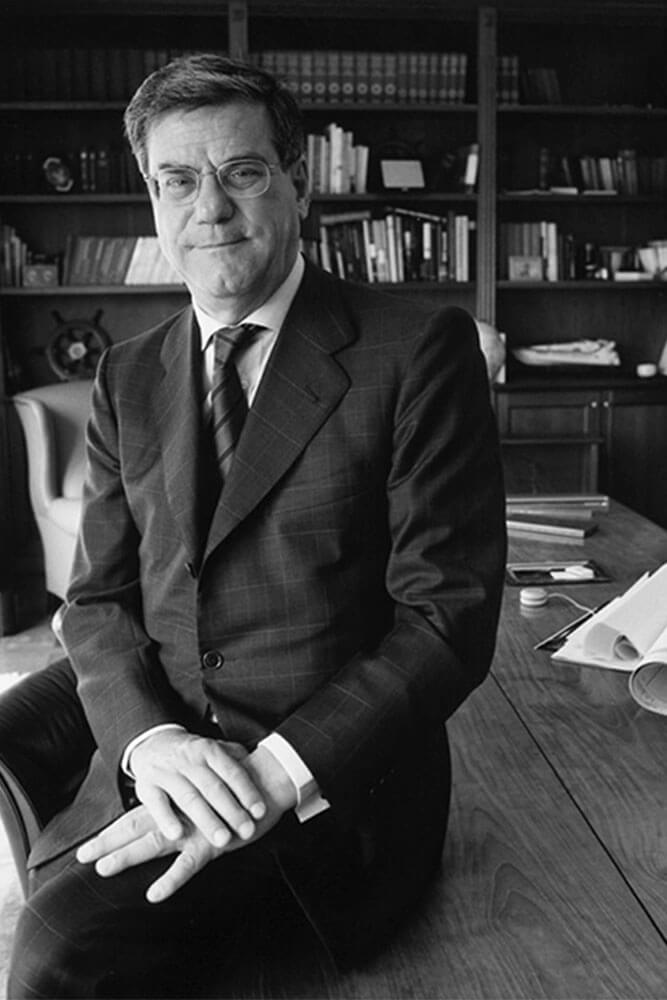 After 111 years of the family-owned business, in 1985, the Azimut group, owned by Paolo Vitelli, acquires the Benetti Shipyard. 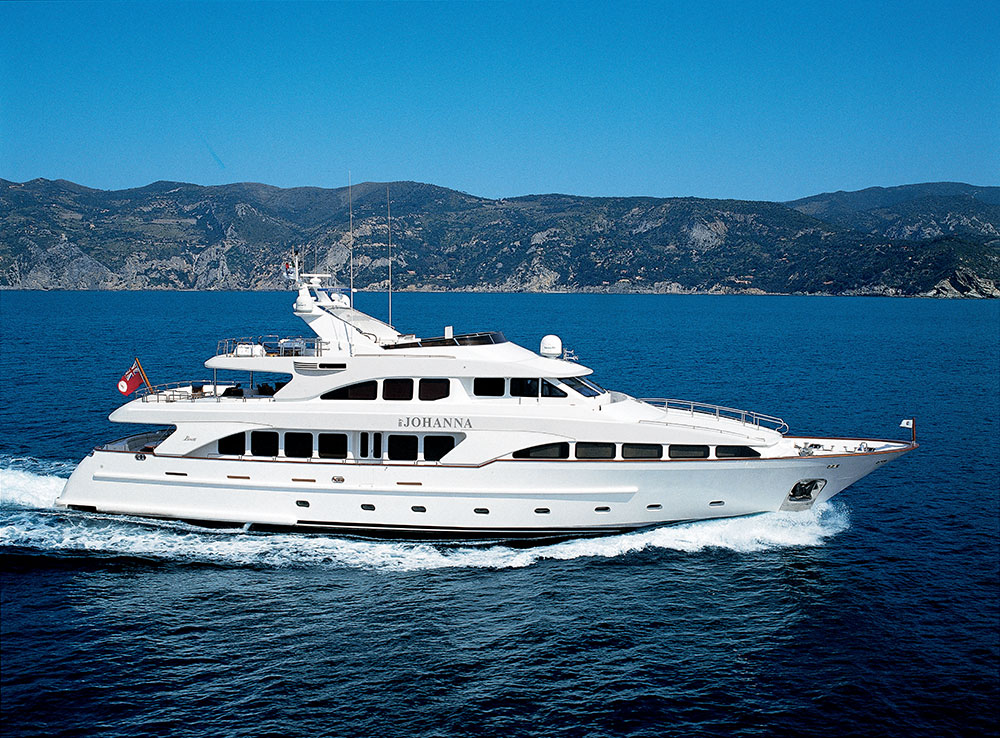 In 1998 Benetti introduces the Luxury Pocket Yacht. For the Class product range, including Benetti Legend, Delfino, Tradition, Classic, Classic Supreme, Vision and Crystal, more than 160 units are sold in the following 15 years. 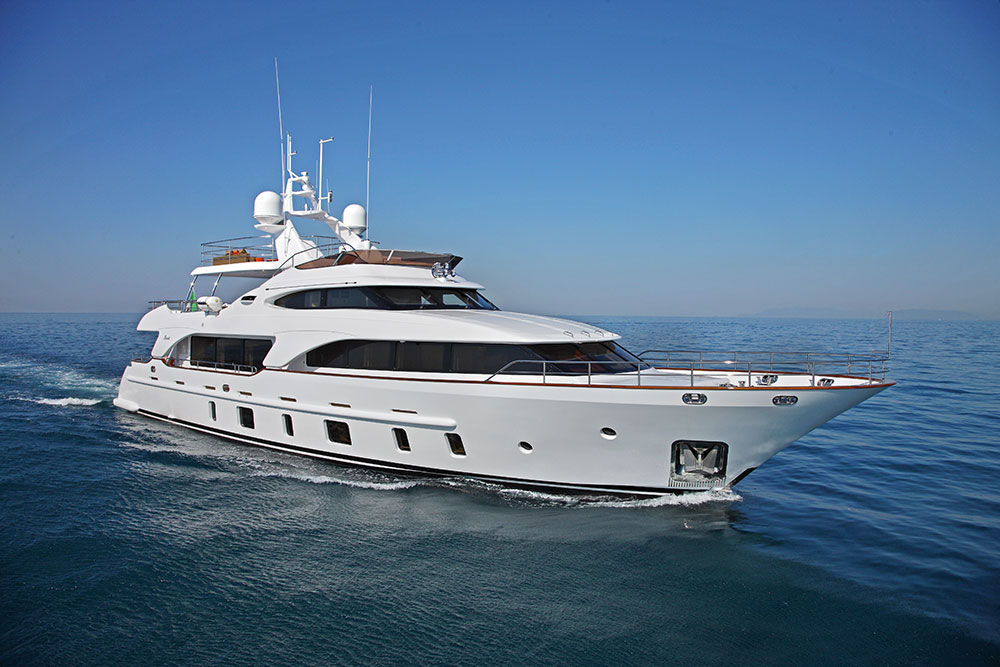 With the Luxury Pocket Yachts, Benetti surrounds the seas. The Vitelli family brings the Italian shipyard back to the top of the international yachting world.
M/Y REVERIE, EVERYTHING EXTRAORDINARY
A new challenge, a new victory. Benetti continues to promote the yachting avant-garde. 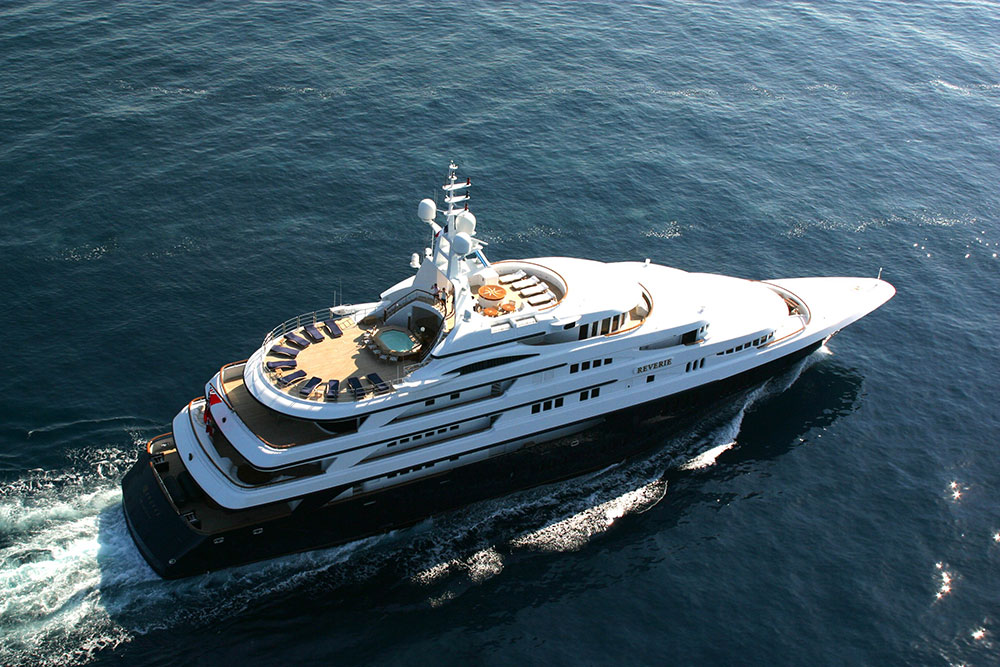 In 2000: Benetti launches M/Y Reverie, 70 meters of extraordinary excellence, thanks to the innate elegance of its exterior lines designed by Stefano Natucci. 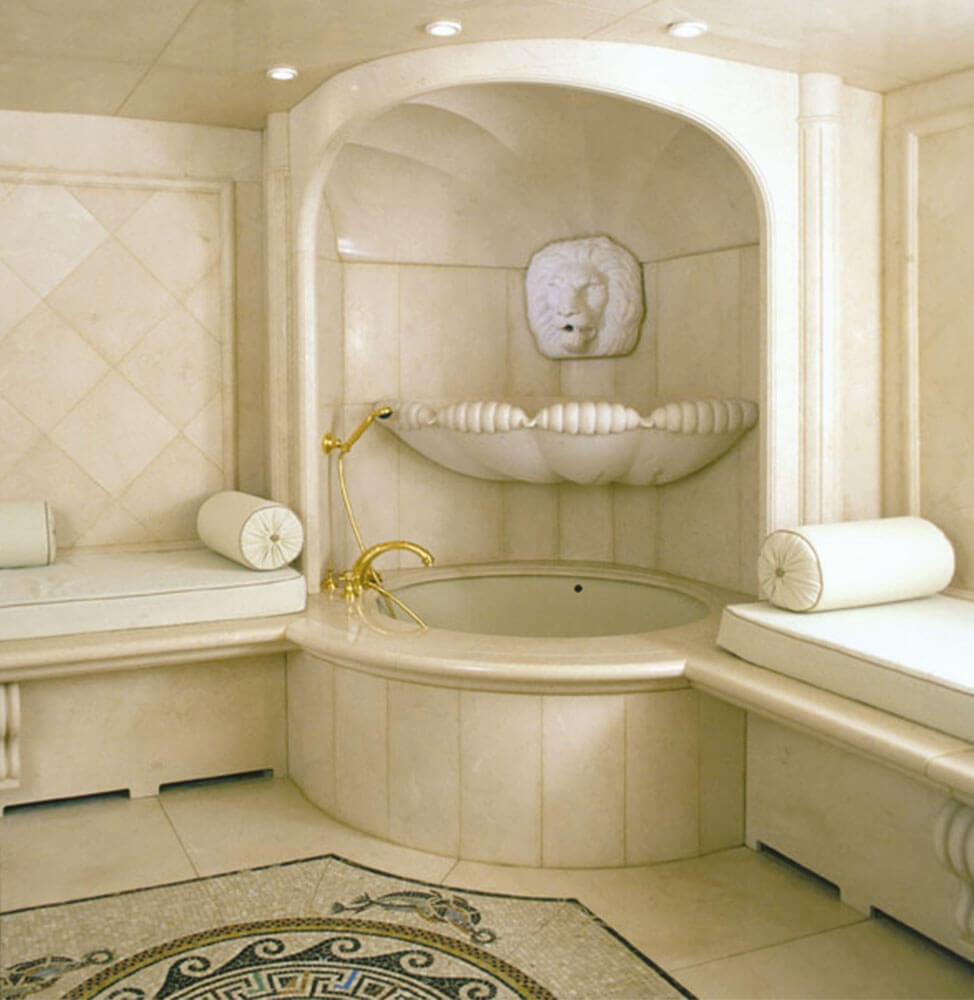 A floating palace that offers any comfort, like a Hammam, a barber saloon and a full techno equipped gym. Every journey becomes unforgettable. 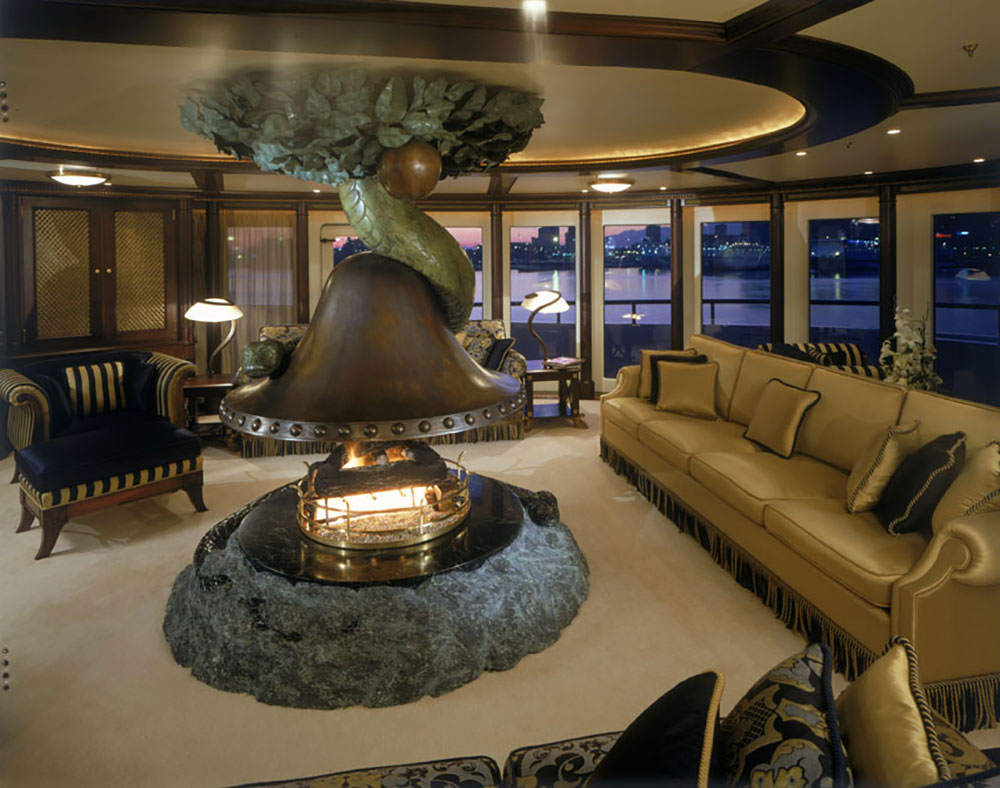 Unique and extraordinary. Inside, a wood oven for pizzas and a huge bronze bell take place. Benetti, once again, makes every dream possible.
TAKE A JOURNEY INTO
BENETTI’S PRESTIGIOUS HISTORY
All images
BENETTI TODAY

Building the most beautiful, reliable, technologically advanced and innovative yachts. And providing assistance anywhere, and at anytime. That is our mission.

Benetti has always been a family-owned shipyard. It has been able to ensure the company’s stable and continuous growth over decades with this strong family background, preserving the founder’s values and philosophy. Up to reach the excellence that made Benetti Yachts famous all over the world.

Above all, Benetti has always embraced new challenges. Thanks to its courageous attitude, Benetti became the only family-owned shipyard that launched 3 giga yachts in 100 days. What challenge will come next? 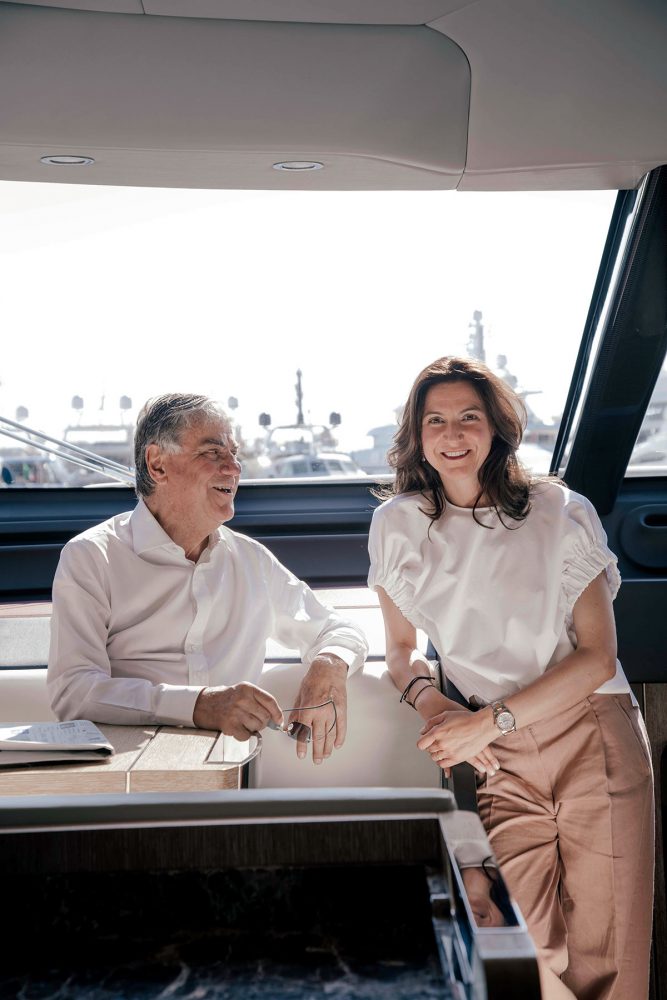 Paolo and Giovanna Vitelli. Benetti is still one of the only family-owned shipyards in the world. 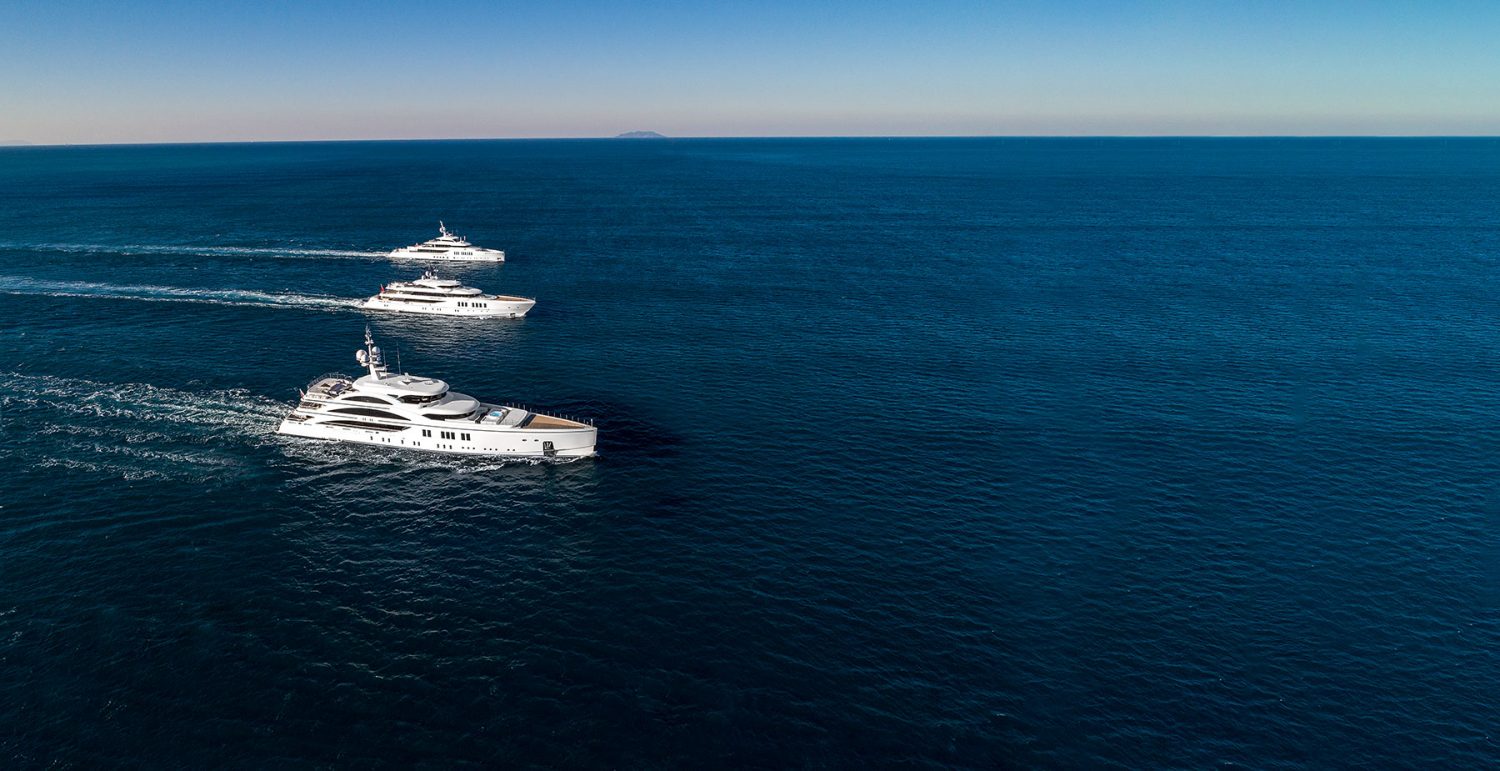 The three MEGA sisters sailing towards America in a once in a lifetime runway: M/Y Spectre 69M, M/Y Seasense 67M and M/Y II•II 63M. 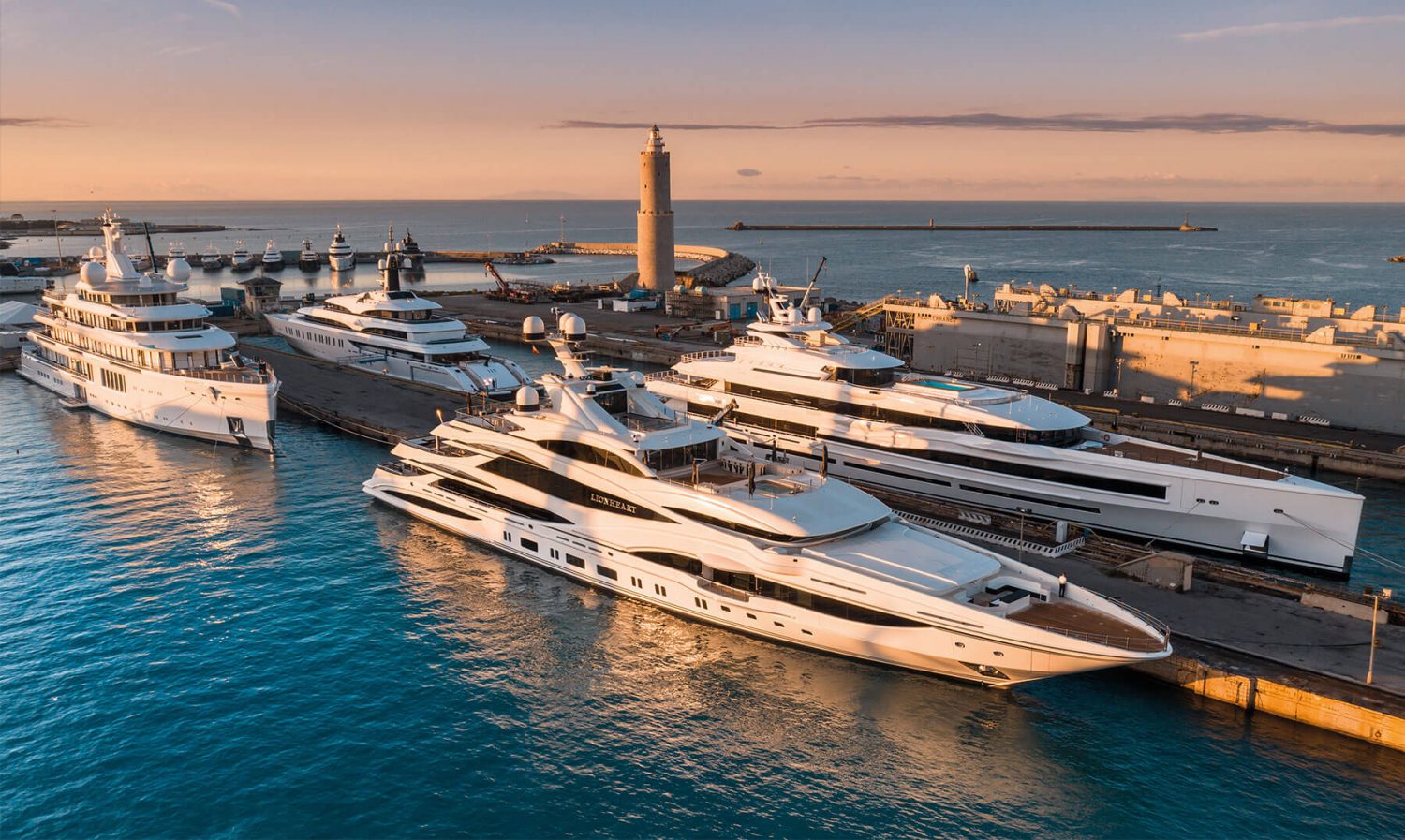 Benetti’s Giga Season: building 3 Giga yachts over 100 meters in parallel and launching them in just 100 days, it sounds like an epic tale, made possible only by audacity and supreme determination.

1873: Lorenzo Benetti (1844-1914) bought the shipyard Darsena Lucca and founded the Benetti shipyard. He managed the company for 40 years, supported by his sons Gino and Emilio.

1910: Lorenzo Benetti was authorized to build his second shipyard Darsena Italia, which is still the registered office of the Benetti shipyard.

1914: Lorenzo’s sons, Gino and Emilio, took over the business and renamed the shipyard to Fratelli Benetti.

1927: after Gino Benetti’s death, his sons, Giuseppe and Virgilio, took his place; Emilio has been assisted by his sons Maurizio and Bertani.

1941: Launch of “Maria”, the first steel hulled, diesel vessel. This pioneering project was managed by Maurizio and Bertani.

1963: the shipyard was managed by the fourth generation. The family legacy was still treasured but, at the same time, the shipyard owners were focusing on the newly developing sector of luxury yachts and took over a leading role during its development.

1978: launch of “Vanina”, designed to win the Admiral’s Cup by the American naval architect Scott Kaufman for an Italian owner. It was the first of a number of motor yachts produced at Benetti.

1979: launch of “Nabila”, designed by Jon Bannenberg for Adnan Kashoggi. Exquisite interiors, 86 meter-long and a displacement of 2465 tons: it became the world’s most famous yacht of that time.

1987: launch of “Rima”, designed by Terrence Disdale for a client from the Middle East. The first vessel built under the new Azimut management was extremely fast despite its steel hull.

1988: the “Azimut Atlantic Challenger” was built by the Benetti shipyard with the aim of winning the Blue Riband trophy for the fastest Atlantic crossing.

1994: launch of the first 45-meter-yacht “Ambrosia”, the most extraordinary yacht built by Benetti by then. It was designed by Stefano Natucci (exteriors) and Francois Zuretti (interiors).

1995: launch of “Golden Bay”, the first of a number of 50-meter-yachts that has been built by Benetti.

1998: launch of “Stella Fiera”, the first Benetti Classic 35-meter-yacht. Benetti initiated the acquisition of the Moschini shipyard in Fano, which had been completed in 2002.

1999: the Benetti shipyard built new offices in Viareggio and promoted a vast growth of the construction facilities.

2000: launch of the 70-meter-yacht “Reverie”, the second biggest vessel that was ever built by the yard. Azimut bought the 41.000-sqm-yard in the harbor of Viareggio, that previously belonged to Lusben Craft.

2002: launch of “Patricia”, the first Vision 45, and sale of the third “Ambrosia”, the first yacht in the world using ABB’s Azipod, a state of the art diesel-electric propulsion system.

2003: “Libra Star” and the first Tradition 30-meter were launched. Azimut Benetti acquired the Fratelli Orlando shipyard in Livorno and proudly celebrated the delivery of the 70th yacht with more 30 meters in length.

2004: Azimut Benetti and Fincantieri reached an agreement for the construction of yachts with more than 70 meters in length. In the same year, they introduced The Classic 120’s.

2005: launch of the first yacht at the Livorno shipyard, the 56-meter-yacht “Galaxy”. Benetti received their first huge order for the construction of four 59-meter-yachts. The Composite range was completed with the 24-meter-yacht “Benetti Legend”.

2009: Benetti introduced the Class range, semi-custom yachts from 28 to 50 meters and built a new shipyard in Darsena Lucca. With this new shipyard, Benetti was able to fit-out three 50-meter-yachts simultaneously.

2010: Benetti introduced the new 47 to 55 meters aluminum semi-planing range. The Delfino 93’ and the Tradition 105’ had been unveiled at the Cannes International Boat Show.

2012: launch of Classic Supreme 132’, the fourth model in the Class range. The Benetti shipyard received its first order for the construction of a yacht with more than 90 meters in length.

2014: two World Premieres: the Tradition Supreme 108’ was introduced in Cannes and the Veloce 140’, the first model of the new range Class Fast Displacement yacht, was presented at the Fort Lauderdale International Boat Show.

2015: World Premiere of the custom-made yacht FB265 M/Y II.II at the Monaco Yacht Show and launch of Vivace 125’, a new model of the range Class Fast Displacement yacht, in Cannes.