After “Quantum of Solace” and “Diamonds Are Forever”, “Spectre” is the third yacht launched by Benetti for talented New York businessman John Staluppi. M/Y “Spectre” is a 69-meter Full Custom Mega Yacht with a steel hull and an aluminium superstructure on five decks. The name pays tribute once again to James Bond, while the hull by Dutch firm Mulder Design aims to deliver extraordinary performance for yachts this size and is fitted with the new Ride Control technology by Naiad Dynamics. The interior design by Benetti’s Interior Style Department brings to mind the Art Deco and Liberty moods of certain French interiors, while the flowing, contemporary exterior contours are designed by Giorgio M. Cassetta. 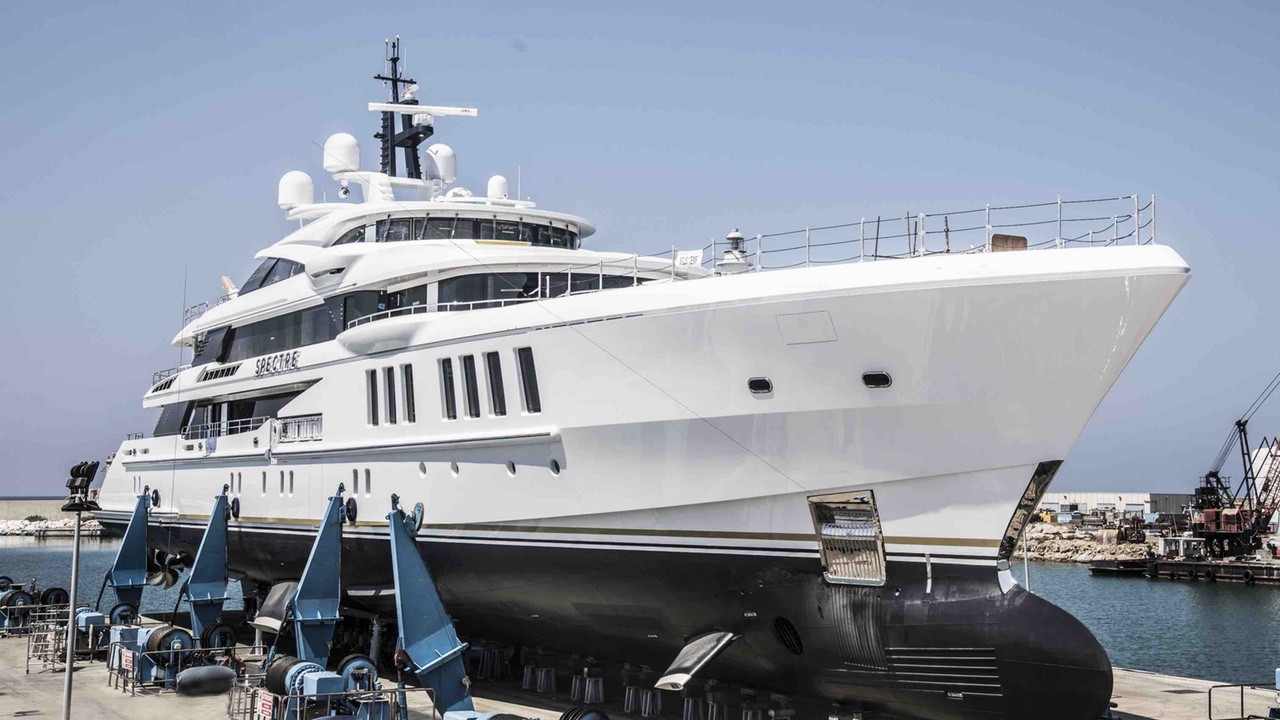 The owner chooses Benetti for the third time and, as usual, celebrates his passion for James Bond, the leading character in the series of films inspired by the novels of Ian Fleming. John Staluppi who has fallen in love with Made in Italy excellence, has named his latest megayacht, a Full Custom launched yesterday in Livorno, “Spectre” after the title of the famous 2015 film starring 007.

The plans for this original boat were developed around the latest marine technologies and combining different styles and philosophies of interior decoration, with references to the past (the nineteen twenties in France) mixed with modern details.

M/Y “Spectre” (FB269) is a full custom 69-meter megayacht, with a steel hull and an aluminium superstructure arranged on five decks, featuring a swimming pool and a ‘touch and go’ helipad. Accommodating 12 guests in unparalleled comfort, the layout features two owner’s cabins (one has a private terrace, a sun lounging area and a hydromassage tub), two VIP cabins on the Main Deck and two guest cabins on the lower deck.

Bringing together Benetti’s most advanced design and construction technologies, M/Y “Spectre” is fitted with Ride Control technology by Naiad Dynamics, representing an absolute novelty for this type of boat. The system significantly increases stability during navigation and improves comfort on board with the help of four stabilising fins and three vertically-adjustable blades.

The lines of the Hi Speed Cruising Hull, designed by Dutch firm Mulder Design, deliver maximum navigation efficiency, with a range of 6,500 nautical miles at 12 knots and a top speed of 21.2 knots, 30% more than a traditional displacement hull.

The exteriors are by Giorgio M. Cassetta, who says that he has fallen in love with the project and is proud to have contributed to the creation of such a technologically advanced yacht: “I’m very fond of Spectre. It’s the perfect example of a virtuous confluence between the ideas of the owner and the shipyard. John and Jeanette Staluppi, with their immense experience and energy, have spurred us on to imagine a yacht complete with everything that could be desired on a boat this size. Benetti accepted the challenge of building it to the highest standards and with a wealth of innovative technology. The splendid result is a satisfaction that my firm will treasure in the years to come”.

The style of the interiors, created by Benetti’s Interior Style Department, recalls the mood of certain French hotels and boutiques, standing out from Staluppi’s previous boats in a more classical and modern way. The floor in the main lounge, for example, draws inspiration from the Liberty style flooring in a Paris resort, featuring symmetrical forms and clean-cut geometrical patterns, enriched here with modern touches provided by the choice of Armani fabrics. Other references to French taste are the windows, a reminiscent of Paris’ typical Liberty style shops.

With the launch of “Spectre”, Benetti begins a period of hectic activity featuring some very big yachts. A remarkable 7 Full Custom yacht deliveries are planned in 2018/2019, including 3 giga yachts over 100 meters each, now being built in parallel at the company’s Livorno shipyard.