BENETTI CONTINUES ITS DAZZLING GIGA YACHT SEASON WITH THE LAUNCH OF FB272. THE SECOND OF THREE GIGA YACHTS TO BE UNVEILED IN ONLY A SHORT PERIOD OF TIME IN LIVORNO, THIS REMARKABLE YACHT IS ANOTHER EXAMPLE OF BENETTI’S EXCELLENCE 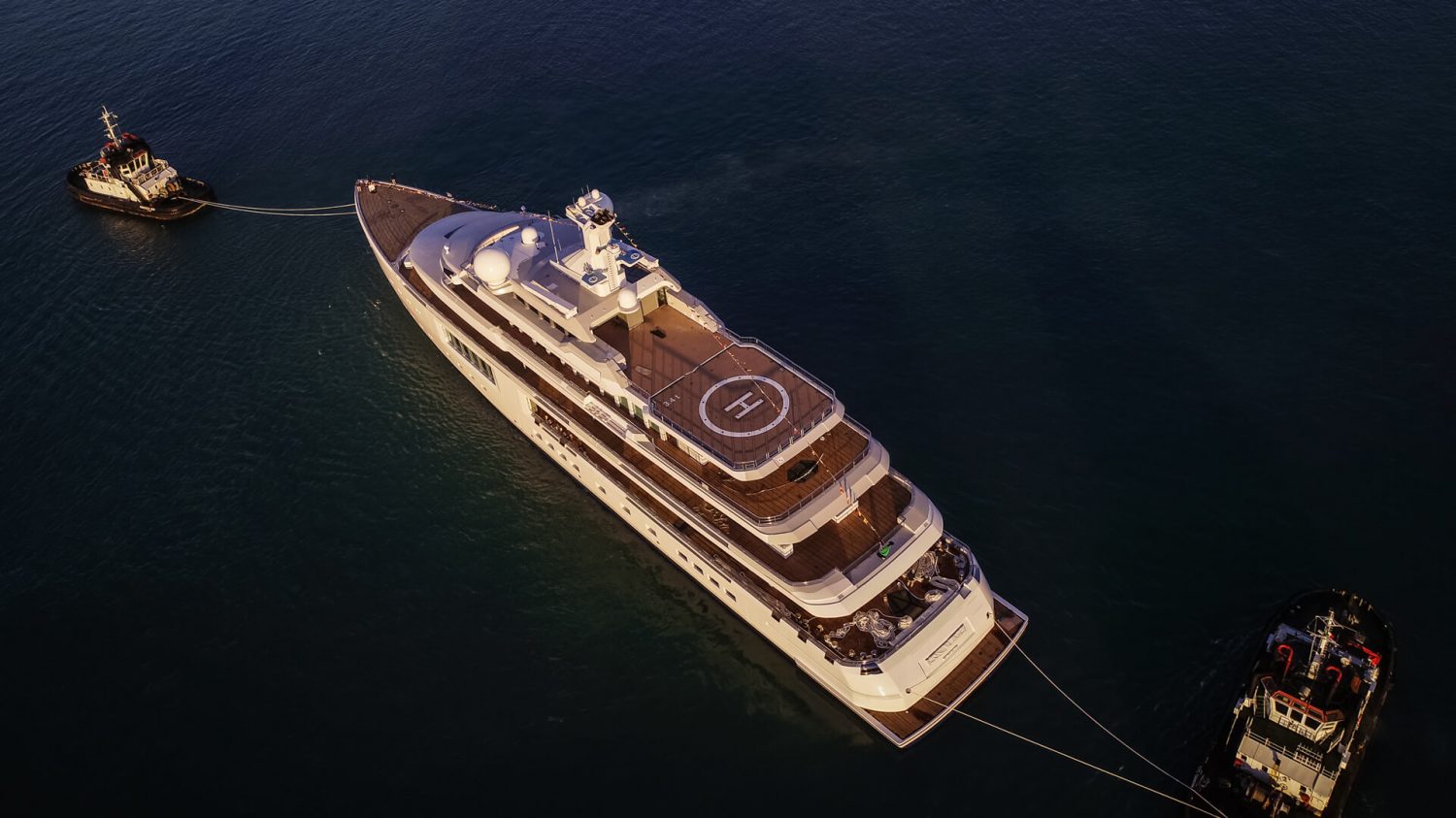 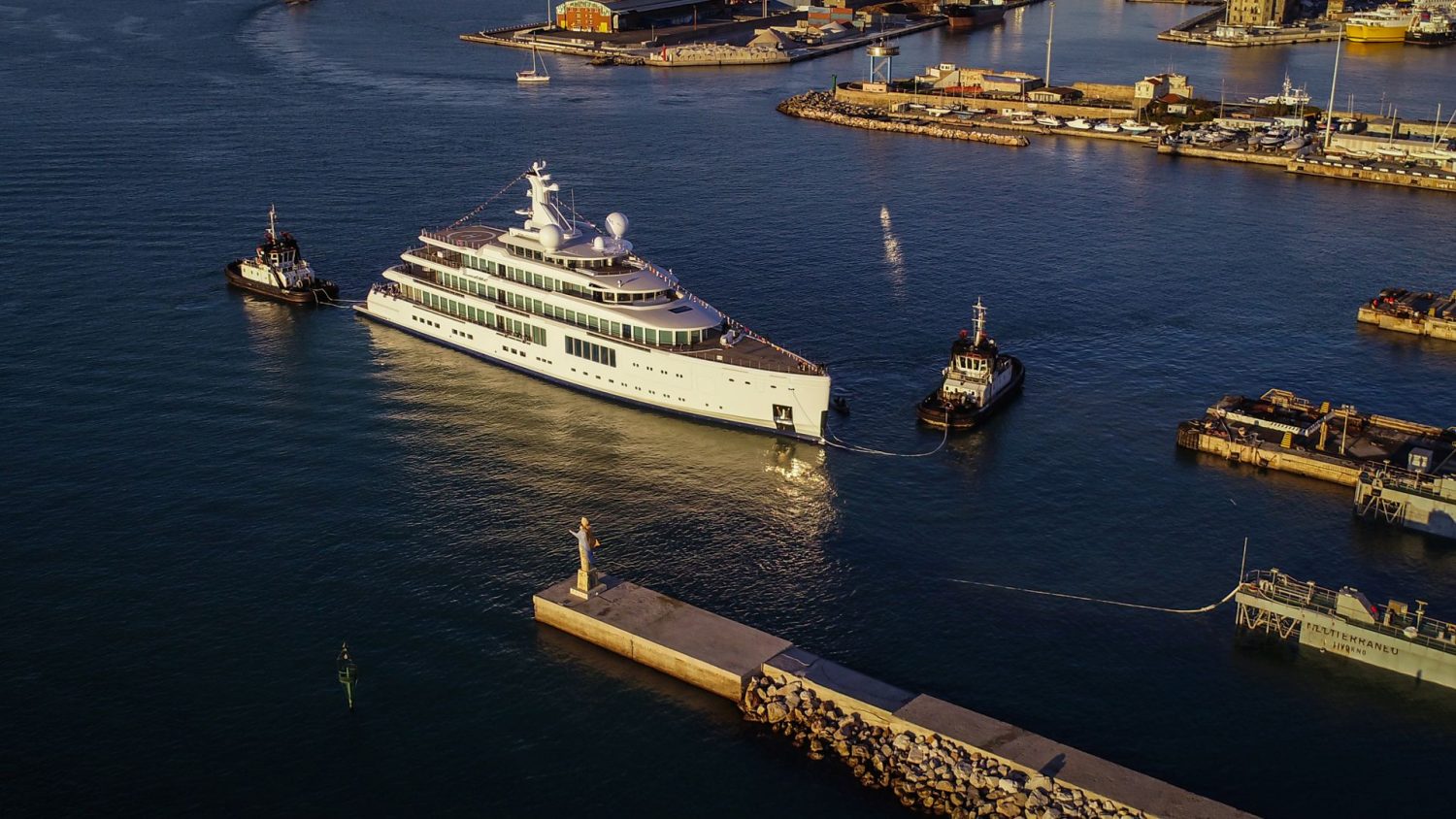 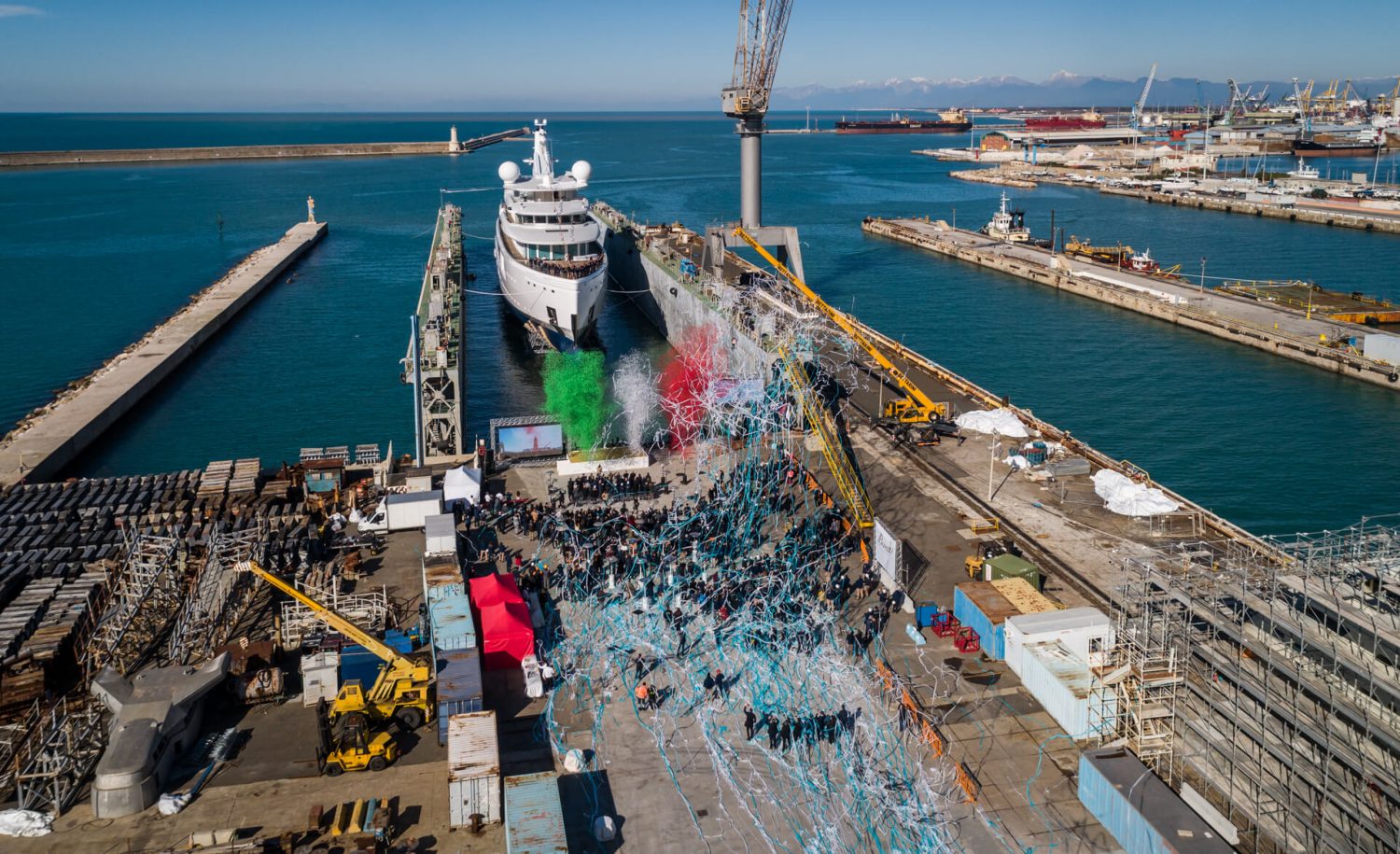 Yesterday, on February 5th, the eyes of the world turned once again to Livorno, where Italian shipyard Benetti successfully launched FB272, the second vessel to demonstrate its jaw-dropping new giga yacht building capabilities. FB272 is a steel yacht with aluminium superstructure built to comply with the PYC (Passenger Yacht Code) with a significant contribution of the owner to the conception and development of the specification, general arrangement and exterior design at the outset of the build. FB272 has been built to the unique taste of a very experienced owner in luxury yachts who has from the start of the project made available the Burgess Technical Services team, a full time, highly skilled and dedicated technical and project management team which has brought its significant experience and expertise in luxury yachts to the project.

FB272 has a displacement of above 5,500 GT, a length of about 100 meters and a beam of 17 meters. The yacht is fitted with a pioneering hybrid propulsion system with diesel-electric engines and two Azipods propulsion units connected to a special battery pack conceived and provided by the owner for total vibration-free navigation in absolute silence.

Less than two months since Benetti launched the giga yacht FB277, the Shipyard celebrates the successful launch of FB272, the second of three giga yachts to be revealed in a few months and a yacht with an entirely unique profile that was conceived by the owner. Prior to going to contract, the owner spent significant time in the development of the exterior design, initially with Hugo van Wieringen from Azure Naval Architects and then with the assistance of Reymond Langton Design and Zaniz Jakubowski of Zaniz Interiors. The exterior design was refined post contract with the assistance of Benetti’s in-house designer, Giorgio Cassetta, supporting Zaniz Interiors who took over responsibility for both the exterior and interior design of the yacht. FB272 is impressively high and massive to offer a new sense of proportion and demonstrates the huge scope of imagination and build capacity at the Italian shipyard. She features an advanced Lutron domotic system – approximately 500 kilometres of cable run across her hull and superstructure. Despite this hi-tech soul, she provides masses of connection with the outside world: the huge windows with 3 meters height offer an incredibly extensive glazing which floods the interior with light, thanks to an outstanding surface of 800 square meters of window glass.

FB272’s exterior lines, which include six decks, were created by the owner, Reymond Langton Design and Zaniz Jakubowski and further developed by Benetti into a buildable 3D model. A straight bow offers brilliant seakeeping credentials, while a huge forward deck area brings guests a thrilling vantage point from which to cruise and relax. The main deck offers further dining and social spaces, sheltered and shaded by the graceful overhang of the beautifully styled superstructure. Above this is the wheelhouse and above again is a charming, private deck leading towards the helicopter pad – fully certificated by a recognized aviation agency – equipped with fuelling/de-fuelling station. High swathes of glass wrap the main decks, with the hull featuring a long horizontal strip of glazing from mid ship to stern. Windows on the upper decks are entirely uninterrupted by structure, giving each deck a floating appearance.

Interior design for the guest areas and crew spaces were conceived and developed by Zaniz Jakubowski of Zaniz Interiors. She also provided her unique artistic expertise in luxury yacht designing to develop a wonderful exterior décor fulfilling the owner’s brief. Known for conceiving spaces that work in synchronicity with their surroundings, this sought-after designer has put her iconic stamp on FB272.

The generation/propulsion package is obtained by 6 generators of approximately 1,000 KW each. The electricity produced by those generators is managed electronically, by a sophisticated fully integrated power management system, to feed the consumption of the services on board and the electric motors of two Azipods of 2,200 KW each. The spare electricity is also used to charge 35 tons of batteries which can operate the yacht for 12 hours with no engine running.

This propulsion package is the state of the art of technology today, made by top names such as Caterpillar, Seastema, ABB, under the coordination of Benetti Technical Department. The advantage of this system is a vibration-free navigation in total silence: with such stable and soundless cruising, guests might hardly realize they are underway.

The air conditioning system and chiller units –which were based on the owner’s specific requirements and supplied by H&H- are one of the biggest ever installed inside a yacht of this size with a total cooling capacity of approximately 3,000KW.

The yacht is equipped with a waste heat recovery system conceived by the owner that is capable to feed the yacht and save electrical power in line with the latest green environment requirements.

Attending this momentous launch ceremony there was an exclusive and qualified public: important members of authorities, international brokers, friends of the shipyard coming from all over the world, suppliers, all the employees of the Livorno shipyard and representatives of the owner. Before the launch, guests were invited to tour the shipyard and admire the helipad, sheds, shiplift and floating dock before visiting other beautiful Benetti yachts: such a perfect frame for the new Giga Yachts. The launch ceremony was ended with a spectacular entertainment show with special effects. Shortly after, Benetti’s guests moved inside the shed to enjoy a lunch in the awe-inspiring setting where the yacht was created. During lunchtime the guests were delighted by the epic proportions of the space, with the roof as high as a cathedral.

Yesterday Azimut Benetti’s President Paolo Vitelli declared, “On this auspicious day, I could not be prouder to stand here among Benetti’s family, friends and colleagues to witness the launch of our latest enthralling creation. This iconic project has had a huge impact on local industry and, after more than 2 million hours of skilled work from over 100 suppliers, we can truly pronounce her as a wonderful achievement for Livorno and the “Made In Italy” ethos as a whole. The use of such a large number of suppliers is integral to the Benetti superyacht building philosophy: the perfect balance between the best “Made in Italy” craftsmanship with the most advanced technological and innovative solutions available on the international market.

The Giga Yacht Season is the result of massive investment in the shipyard – an ambitious business plan has prompted financial input of relevant investment in infrastructure, organisation, safety and security, to overcome the challenges presented by building such giga yachts. The development by Benetti of the Giga Yacht Construction Programme has also required the creation of a very large special team of experts in this specific type of project and the adoption of the most advanced industrial processes in order to guarantee the top-quality level expected for this kind of products. Expansion at the Livorno shipyard, in the form of two new generation steel structure sheds, has enabled Benetti to massively increase its productivity. Benetti is one of the very few yards in the world with the capacity and capabilities to build yachts over 100 meters long.