Another gratification for Benetti after the positive feedback from sponsors, yachting professionals, captains and crews who attended the Benetti Yachtmaster 2018. During the five legs of this edition more and more contemporary topics in the yachting business have emerged, above all the increasingly importance of environmental protection. After the October 2017 Spanish event and the last February Italian leg, in May it was the time of Miami for the last event of this edition. The US leg was preceded in April by the Singapore and Monaco Roadshows. 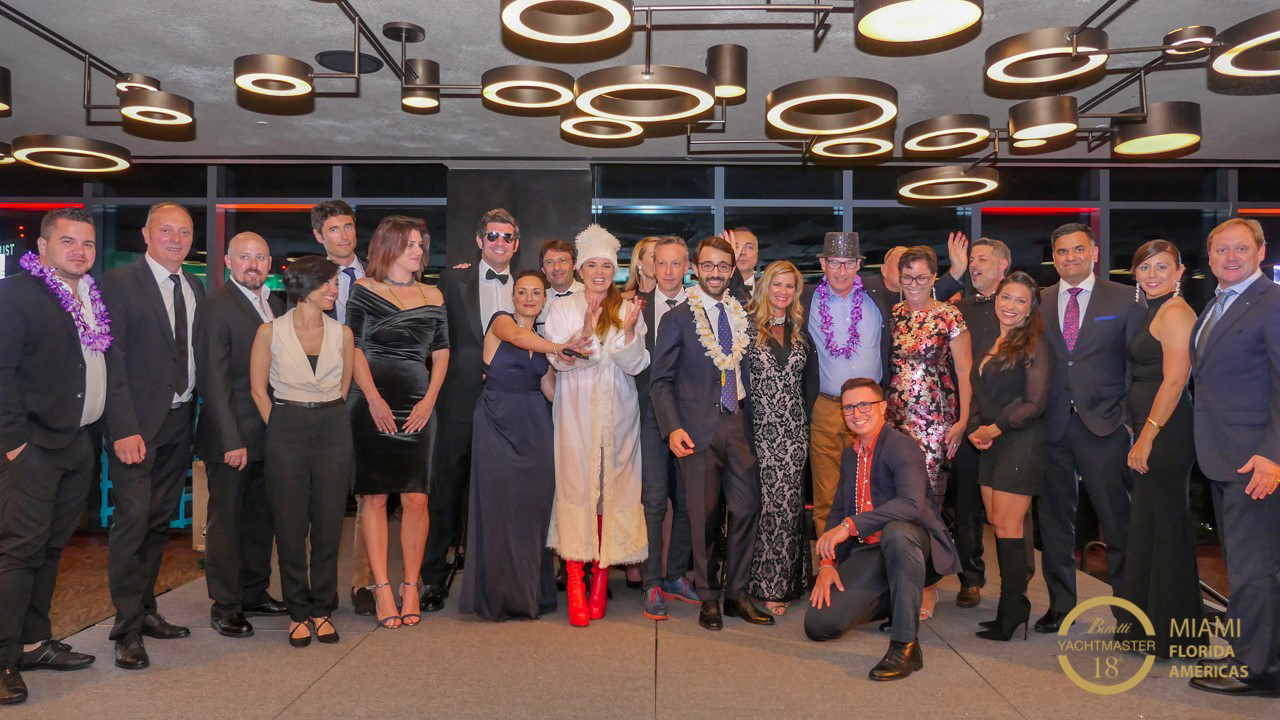 Wonderful feedback for the eighteenth edition of the Benetti Yachtmaster, the event that gathers together captains and yachting professionals and brings them up to speed on all the novelties and at the same time offers a series of panel discussions and networking opportunities. In addition, the last US event (from May 2 to 4), which ended with a large party and the promise to return next year, confirmed the success of this event and affirmed its role as one of the most important gathering of industry professionals, organised by a private shipyard.

Important novelties have been introduced for this last leg. First and foremost was the change of location: Benetti has left the water and chosen to move to exclusive downtown Miami, the beating heart of this city with its spectacular ultra-modern skyline. Introduced by Roberto Corno, Worldwide Sales Director, the American event was attended by 34 professionals, many of them attending Yachtmaster for the first time.

Opening the work sessions, Fabrizio Scerch and Tommaso Bilotta, respectively Country Manager and Brand Manager of Benetti Americas, spoke about the company’s ambitious plans for the future and its new models. The International Safety Management Code For the Safe Operation of Ships was the focus of presentations by Peter Selivanoff and Eric Turoff from Fraser Yachts, which were followed by the workshop organised by Lucy Fox and Kristen Husk, also from Fraser Yachts, on MLC 1.4 Convention guidelines.

On the second day, after a morning devoted to team building, the workshops discussed topics linked to the development of sustainable yachting. The speakers included captain Craig Tafoya, president of ACT2 Technologies Water Reclamation and Purification, the innovative company at the forefront of the fight to clean up and preserve the world’s seas, who drew attention to increasing interest in onboard wastewater treatment systems. Catherine Kent, an attorney with law firm Alley, Maass, Rogers & Lindsay, then went on to illustrate the latest bureaucratic novelties in the US charter industry and, finally, Stefano Mazzoleni of Rina, in his capacity as a panelist, introduced and directed the workshop “Introduction to Marpol”, the international convention for the prevention of pollution caused by ships.

The US leg was preceded by the Roadshows in Singapore (April 9) and in Monaco (April 18), two of the most exclusive destinations in the yachting world.

In Singapore, after a welcome speech by Benetti Asia General Manager Peter Mahony, the main subject of the meeting was once again the environment. Benetti is increasingly aware of the importance of limiting the impact of yachting on the ecosystem and for this reason, in Singapore too, the company invited Rina, represented by Leander Aarons, Marine South East Asia & India Area Director, to moderate the workshop entitled “Introduction to Marpol”. The event was brought to a close by an aperitif in perfect Italian style and an elegant dinner.

The Monaco Roadshow, hosted by the exclusive Yacht Club de Monaco, also featured the participation of numerous captains who are also Yacht Club members. The presentations by Alexander von Stein from the Marshall Islands Registry and Jean-Philippe Maslin from Ince & CO turned the subject of debate to French Social Charges, while Giorgio Gallo and Enrico Ursomando from Rina put the spotlight back on the environment with their illustration of Tier III, the regulations that have introduced the requirement to install catalytic converters for marine engines too, in order to reduce nitrogen oxide emissions in exhaust fumes. Lusben, a major player in the refit and repair segment thanks to its huge production facilities and expertise, finally brought the working sessions to a close with a presentation of its main activities and future projects.

Roberto Corno, Benetti worldwide sales director, commented: “The high attendance at each leg of Yachtmaster this year confirms the importance of this unique event, which has become a traditional appointment for captains and crews. In addition to the chance to network and learn about the latest novelties, Yachtmaster is the only event in the sector to offer opportunities to exchange views and experiences in a constructive setting, not only with the shipyard, but also with co-workers, suppliers and industry professionals”.